After the Flash Flood 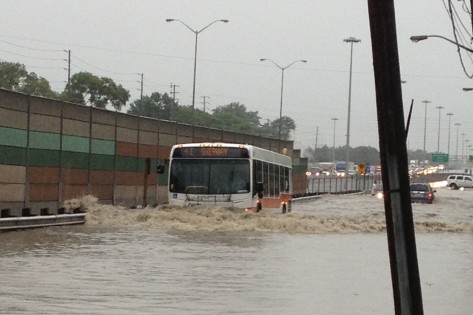 As we canvassed throughout Etobicoke Centre over the summer, the flash flood that hit the area on July 8th, 2013 left many wanting answers. The community at large wanted action, and felt the immediate response at the time was highly insufficient.

In response to the basement and street flooding, their is an inspection of various parts of the sewer system. There will be CCTV, or close circuit television, cameras entering the pipes to take pictures and asses what needs maintenance. This study started in January and is set to wrap up in April of 2014. There will be minimal interruptions, and there is no requirement to enter homes to help with the inspection.

Information as to where the inspection is being held and the times of operations:CCTV Camera Sewer Assessment

One of the main concerns we heard from residents was about the response from 311. Many people felt that they were unprepared for the event, which left many residents vulnerable and not being able to get through.

This is a report from 311 on the improvements they are planning to implement:311 Service Delivery Feedback and Enhancements

These improvements include ways to improve customer service, reduce wait times, and integrate with other agencies of the city. There will be a follow up report during the second quarter of 2014, of how these improvements will specifically be implemented.

Whether it be the flash flood of June or the ice storms of this past winter, now is the time to start looking at local infrastructure and see if there are solutions the community can organize around to get make things safer and more adaptive in the future. If you are passionate about urban planning, staying on top of the city's response, or would like to contribute in your own way, reach out now and help plan our infrastructure initiative: [email protected]